RecordMAN application is designed to work with built-in recording system EbdRec* in Slican’s PBXes (except ITS PBX) . It consists of “Server”, which allows you to download recordings from PBX, and save it on your computer in local network, and “Client” part – for maintenance of records.

It presents detailed history of connections, and allows searching by a number or specific criteria. 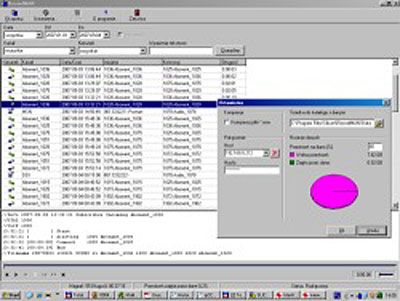 Application for servicing of recorded calls. Instruction “replay recorded call” copy a single file into local disk and play it. Depending on subscribers privileges programmed in PABX recorded call may be saved or not onto own disc.

In  Slican PBXes may be created RecordMAN.Client accounts, with following privileges:

*EbdRec (Embedded Recording) – recording solution implemented in already existing system – in this case PBX. It requires no external devices to store calls. Calls are stored in PBX module, on CF card or HDD. All records are saved with call recording application in/by PABX.

This application is designed to download recordings from storage media in PBX and copy them on computer’s hard drive in local network. It is particularly important in case of Slican PABXes where CF card is storage media with limited capacity.

You can find out more about which cookies we are using or switch them off in settings.

This website uses cookies so that we can provide you with the best user experience possible. Cookie information is stored in your browser and performs functions such as recognising you when you return to our website and helping our team to understand which sections of the website you find most interesting and useful.

Strictly Necessary Cookie should be enabled at all times so that we can save your preferences for cookie settings.

If you disable this cookie, we will not be able to save your preferences. This means that every time you visit this website you will need to enable or disable cookies again.